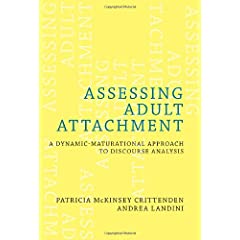 My review of “Assessing Adult Attachment: A Dynamic-Maturational Approach to Discourse Analysis”. 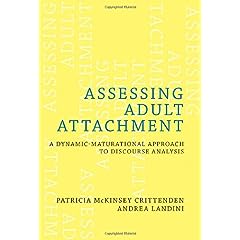 Attachment theory has come a long way since John Bowlby’s paper “Forty-four Juvenile Thieves” was published in 1944. In the paper Bowlby wrote about his work with disturbed youth in London. He theorized for the first time that the nature and security of an individual’s relationships to their primary caregivers during infancy and early childhood equips them with the methods they will use to express their feelings and needs in later life. Those relationships also predict how people will form relationships with significant others during adulthood.

Through further research into Bowlby’s initial ideas – and the invention of the Strange Situation experiment – Mary Ainsworth was able to develop a clear system of classification for this theory, which could be used to identify three unique patterns of attachment: Type A (Avoidant), Type B (Secure), and Type C (Ambivalent).

This rudimentary ABC system has been at the heart of attachment theory since its inception, and has paved the way for a host of psychological texts and theories. Titles such as “Attached” by Dr. Amir Levine and the “Attachment-Focused Family Workbook” by Daniel A. Hughes join countless other attachment-specific books currently on sale, and Dr. Sue Johnson’s research into relationships and subsequent development of her Emotionally Focused Therapy (EFT) program have brought about a revolution in the field of couples therapy. Indeed, a recent issue of the American Association of Marriage and Family Therapy’s ‘Family Therapy Magazine’ was entirely devoted to The Science Of Love, reporting the recent findings of groundbreaking research focused on the understanding of romantic love and adult attachment.

It is clear, therefore, that the ABC classification system of attachment theory has a lot to offer those in the therapeutic field, but it is not without its problems, either. First, it often seems overly simplistic: the classifications can be vague and unreliable, everyone is forced to classify themselves with one of just three basic attachment styles, and there is no option of further classification within each division. Second, it is too limiting: people frequently feel typecast and stuck within one specific attachment style, with no option for change or progress. Third, it is outdated and culturally biased: the system was derived from work in the cognitive sciences in the late 1970s, and based largely on findings from observations of middle-income, low-risk American families. And fourth, it offers very little in terms of a solution: once someone has identified their attachment style, then what?

The main cause of these problems has been the source of the classification data itself: the Adult Attachment Interview (AAI), an interview and coding method developed by Mary Main and Ruth Goldwyn in the 1980s which has been the primary method of collecting and interpreting attachment information ever since. Now, at last, with this book, Crittenden and Landini have provided us with a more up-to-date, efficient and multicultural alternative, which continues to be compatible with the AAI data collection method, but works equally well with other forms of interview, too: their own Dynamic-Maturational Model (DMM) of attachment.

“Various theoretical perspectives on attachment can be applied to the interpretation of the AAI. Main and her colleagues developed the AAI based on a version of attachment theory that assumed that (1) by adulthood most adults had a single representation of attachment relationships, (2) this relationship reflected one of the Ainsworth patterns of infant attachment, (3) these patterns were transmitted from mother to child across generations, and (4) frightening circumstances disrupted the organizational process, leading to a state of disorganization in infancy or lack of resolution of the frightening circumstances in adulthood.

In the Dynamic-Maturational Model of attachment and adaptation, none of these four assumptions are made. To the contrary, the DMM approach to attachment theory presumes that adults have multiple dispositional representations, each unique to the information processes underlying it. Second, the array of strategies is developmentally expanded from its roots in infancy, with endangered individuals most often using the later developing and more complex strategies. Third, it is understood that each individual constructs his or her own dispositional representation from his or her own experience. Sometimes this will reflect similarities to the parent’s dispositional representation, but, especially in cases of parental disturbance or inadequacy, children will often organize the opposite strategy from the parent… Finally, exposure to danger is assumed to be the essential condition that elicits attachment behavior, and, across repeated experiences, leads to organized self-protective strategies.”

Clearly, the introduction of this model represents a major leap forward in our understanding of attachment and attachment theory, offering a far more detailed and multicultural system of classification than the old ABC model. Over the course of this book, Crittenden and Landini fastidiously lay out a new classification system, with many numeric subdivisions within each individual attachment strategy. In fact, the research is so exhaustive and delivered in such great detail that it seems almost impossible that any clinicians reading this would not recognize each of their clients at least somewhere within the text. The downside to this is that this is not an easy book to read; it is certainly not something you will want to flick through to help you relax at the end of the day. But those who do make their way through the sometimes dense and challenging text will come out feeling incredibly rewarded for their perseverance, armed with a new treatment model for working with their clients and a new understanding of the complexities of adult attachment.

Essentially, what the field of attachment theory has been sorely lacking is its own Diagnostic and Statistical Manual — a modern, flexible, and multicultural tool which will provide practitioners with the common language and standard criteria for the classification of specific attachment styles, and their best-practice solutions. Now, with Crittenden and Landini’s long-awaited book, it finally has it.

Critically, though, this book aims to do much more than serve as just a DSM for attachment theory. As well as a basis for gathering empirical data, the authors provide us with a compassionate new guide for treatment formulation, and there is a chapter – titled ‘But What Shall I Do?’ – dedicated specifically to this cause:

“Researchers are happy with a reliable classification, but not so psychotherapists and others who must guide troubled individuals and their families. They need an action plan. In this chapter we describe how one uses an AAI classification, combined with information about the history and current functioning of the speaker and his or her family, to derive a functional formulation. The functional formulation is the professional’s dispositional representation (DR) of the relation between the service structure and the individual and his or her relationships. Like all DRs, a functional formulation is dynamic; it is always changing as new information is integrated into the existing set of information… We describe how to derive functional formulations that can guide treatment both at its onset and, with feedback and updating, across the course of treatment.”

Crittenden and Landini then go on to demonstrate exactly how their model can be used as a therapeutic tool, using the initial classification as starting point to guide both the therapist and client toward the resolution of past issues and the reorganization of the thoughts and language that shape both our ideas of self and attachment strategy. Furthermore, this model aims to shift the focus on attachment styles from one of disorder to one of function; from the old deficit-based model to one that is dynamic and optimistic. Rather than an emphasis on diagnosis simply for the sake of identification or labels, the authors stress their hopes that this model might open the doors to new ways of thinking in not just the mental health field, but others as well, concluding that:

“When functioning is understood as attempts to protect rather than to damage or harm, alliances between mental health professionals and people in need of care become more likely.

Many say that DMM theory and methods are complex, too complex for working clinicians. After a century of trying to understand and ameliorate mental illness, it seems unlikely that simple theory, simple assessment, and quick manualized treatment will be more successful than our past efforts. It is more likely that theory needs to be sufficiently complex to represent the crucial aspects of the life experiences of people with mental illness. The assessments need to be sensitively attuned to the encrypted communications of very distressed adults, and to be coded by skilled professionals trained to a high level of reliability.

Possibly, the greatest potential of the DMM-AAI is its capacity to focus observation precisely while retaining the openness to expand and change understanding of observations. We hope this book will be used to promote accuracy of observation, clarity of interpretation, and – most important – discovery of new ideas about human adaptation. Psychological tools that yield useful data without restricting thinking are very valuable. The DMM-AAI does more: It opens the door to groundbreaking basic and applied research of as much relevance for the social sciences as for the healing professions.”

This is a groundbreaking piece of work, containing a life-span view of adaptation that is both intuitively succinct and simple in structure, yet also completely nuanced in execution. Researchers and clinicians alike will undoubtedly benefit from the wealth of information shared here, and it is a must-have for anyone with an interest in attachment theory, representing a major evolutionary step forward in the field.